According to Sheffield Council, the former open-air ski center has become a prime location for a range of anti social behaviour including vandalism and fly-tipping. The now derelict site which is located just off Vale Road is becoming overrun with rubbish and waste. The Sheffield Star reported that people now describe it as an “eye-sore.” 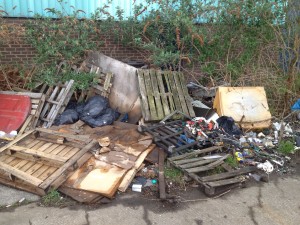 The Ski Village closed in 2012 after a series of fires that destroyed the site. Since the closure, it has been hit by several arson attacks and also become a dumping ground for scrap vehicles, tyres, rubbish, and demolition material.

The Dangers of Uncontrolled Waste Disposal

Dumping waste such as this on unlicensed land and derelict sites is described as fly tipping. Not only is this practice illegal, it is also damaging to the environment and not very nice to look at. In theory, fly tipping can happen anywhere. The derelict site of Sheffield’s Ski Village has become a place to dump waste due its disuse and the lack of security on the site.

Understandably, people that live near areas that are used for fly tipping are very unhappy about it, as it is not only unsightly but can be dangerous too. Uncontrolled waste disposal can actually be hazardous to the general public and their pets as it can include syringes and chemical waste, as well electrical items and other waste. This type of waste can also damage the environment, especially wildlife and waterways.

Here at Clearance and Clean Up, we provide a rubbish removal and fly tipping waste removal service in Sheffield and throughout Yorkshire. Our team are able to visit a site in a matter of hours, and take the correct action to remove the waste. We carefully clear the area, making sure that we dispose of any waste correctly, and we also endeavour to recycle as much as we possibly can.

If you have been affected by fly tipping and are looking for a reliable, local rubbish removal service in Sheffield to remove the waste, we can help. All of our prices include labour and disposal fee, there are no hidden charges, and you can rest assured that your waste goes to a proper licensed disposal facility. For rubbish removal Sheffield, please contact Clearance and Clean Up on 0800 410 1086 or 0114 403 1021, or email us on [email protected]

Tom Pickering is the Managing Director of Clearance and Clean Up. Tom has created a highly motivated and well trained team that can deal with multiple tasks in many different environments. Connect with Tom on LinkedIn >>
Related Posts
What To Do About Chesterfield Fly Tipping & Why It Happens

Here we look at Chesterfield fly tipping. Where you can report it, how to avoid becoming a victim and why it happens.