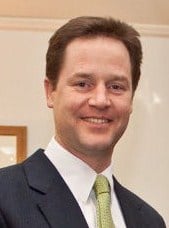 It’s been well reported in local and national media that the amount of discarded rubbish littering the streets of the UK appears to risen dramatically. As rubbish removal and house clearance Sheffield experts, it’s clear that littering has become more of a problem, and that one of the possible solutions to this may be the education of young people to encourage them to take responsibility for disposing of rubbish correctly.

The Bin It! Campaign

According to a recent article in the Sheffield Star, Nick Clegg, who is the current Sheffield Hallam MP, has visited High Storrs School in Bents Green, Sheffield, to talk about the Bin It! Campaign. The scheme itself aims to educate students about taking responsibility for litter, and has been developed by the chewing gum company Wrigleys, in partnership with the education consultancy Rapport. The Bin It! campaign is aimed at 11 – 13 year olds, and hopes to ‘encourage them to think about why people litter, reflect on their own behaviour and emphasise the importance of caring for their local area.’

Educating Young People About the Problem of Litter

Bin It! said “We use a team of actors to engage and educate young people about the problem of litter. This hands-on approach encourages pupils to make positive choices about the responsible disposal of litter in their community. Bin It! has a proven record of success, with results showing that a significant proportion of pupils think more about litter disposal having taken part in the session.”

£75 Instant Fine for Littering in Sheffield

Sheffield City Council have been also been working to reduce the amount of litter discarded in the city, imposing an instant fine of £75 for littering. The council issue fixed penalty notices to people who are caught dropping litter, and if they do not pay it, they will be taken to Court. It is also a criminal offence to drop litter or throw it from a car, and dog fouling in a public place can also result in a fixed penalty fine.

The local Council have also listed ways that residents can help to keep Sheffield tidy which include, not dropping litter on the streets, ensuring that dustbins and wheelie bins are not over filled, clearing up after your dog, and not disposing of household rubbish in litter bins. They also recommend teaching young people in the family to dispose of litter responsibly, echoing the message sent out by the Bin It campaign and Nick Clegg at High Storrs School.

If you’ve got rubbish to be disposed of from a move or a house clearance Sheffield, Clearance and Clean Up can help. All of our prices include labour and disposal fee and you can rest assured that your waste goes to a proper licensed disposal facility. For rubbish removal and house clearance Sheffield, Doncaster, Rotherham and Barnsley, please contact Clearance and Clean Up on 0800 410 1086 or 0114 403 1021, or email us on [email protected]