We are often called in to properties that have been repossessed to clear the house of the previous occupiers’ mess. We were asked not too long ago to carry out some work on a fire damaged property in Barnsley. The work was issued by a national company and had to be carried out in a very short time scale as they themselves were working to a deadline.

Exposed
There were many problems with this property, but the most difficult to contend with was the fact the roof had being taken off following a fire. So despite the house being fire damaged, the whole building was soaked throughout due to being exposed to the elements. 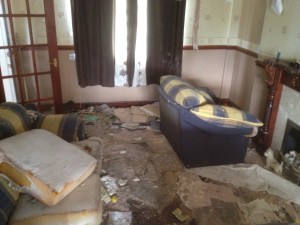 Wet & Heavy
Every room in the upstairs of the house was covered in pieces of the ceiling, which had fallen through. The wet plasterboard had to be removed prior to removing the items of furniture and carpeting which were also soaked, very heavy and filthy from the fire. Naturally, we found moving the heavy, damp plasterboard a bit of a struggle! 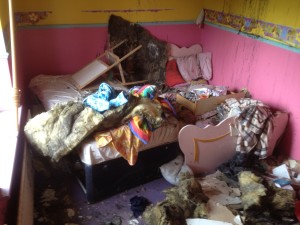 Making the Property Presentable
Once the property was cleared and fully swept through we had to go back and give it a thorough “basic” clean before the property was ready to receive viewings from prospective buyers. The front and back gardens were also very overgrown. Coupled with the fact that they were full of rubble and broken tiles from the damaged roof, this made it hard work cutting back and clearing it. We needed to make sure the gardens were presentable so that people viewing the house could appreciate the size.The job was a tiring and extremely dirty job which needed to be tacked fast. We put in a lot of effort so that we would be finished for the deadline date. 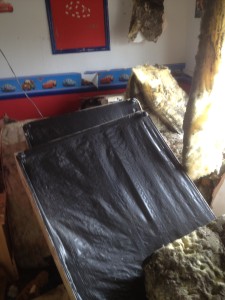 After We Had Finished
Overall the property went from being overgrown, filthy and full of rubbish to a clean and clear space with a nice garden. Of course there was little we could do about the fire damage and roofing situation, however we put the property in a position where it was able to be viewed by the public safely, and so that they could visualize what a completely renovated house might look like. 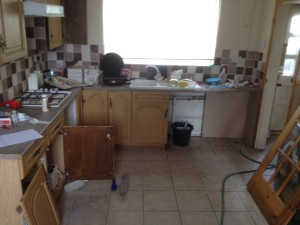 Success!
In total, we cleared away 4 van loads of rubbish, which equates to approximately 5 tonnes! All rubbish was taken to a local waste transfer station and anything that we could recycle was done so appropriately. The work we carried out went a long way to helping the owners in selling. The house was sold on the 1st viewing after we had finished, whereas before, 3 previews viewings wouldn't even go inside! Another success for Clearance and Clean Up! If we can help with your clearance and removal needs, drop us a line. Find out how on our contact page.