There’s no job too big for us, and not too long ago that claim was well and truly put to the test. We were called in for a large scale clearance in Leeds City Centre, removing all kinds of rubbish from behind the iconic Corn Exchange shopping centre.

The adjoining alley way between two busy streets has been an ideal target for litterers, and an enclosure separated by a small wall had been used as a dumping ground by builders for their construction waste and as a litter bin for passers-by.

The wall had to be demolished for ease of access to the large scale 2 day clearance, and in the meantime the alley way was closed in order for the work to be carried out. Amongst the rubbish there were a number of needles and sharp objects with evidence of rats and other rodents. Our cleanup team therefore had to wear full personal protection equipment and clothing and clear the rubbish away slowly and safely.

Upon completion, the area was left open and free of any rubbish and also by taking the wall down we have prevented the area being used as a makeshift skip in the future. Take a look at the before and after photographs of the cleanup: 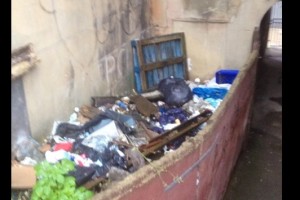 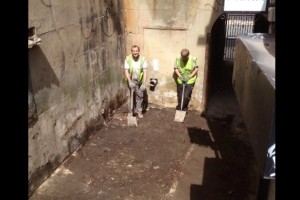